For appropriate digital work distribution, accurate virtual allocation of collected data and coordinates, in tridimensional space with their respective proportions, is an essential condition.

This is possible with the Zirkonzahn automatic light-rays optical scanner and its integrated virtual articulator modeling software. With this scanner, PS1 designed models or other models are measured with the articulator and the data is transmitted, one at a time, to the software’s virtual articulator.

Many articulators are made available with our software, contact us to learn more. 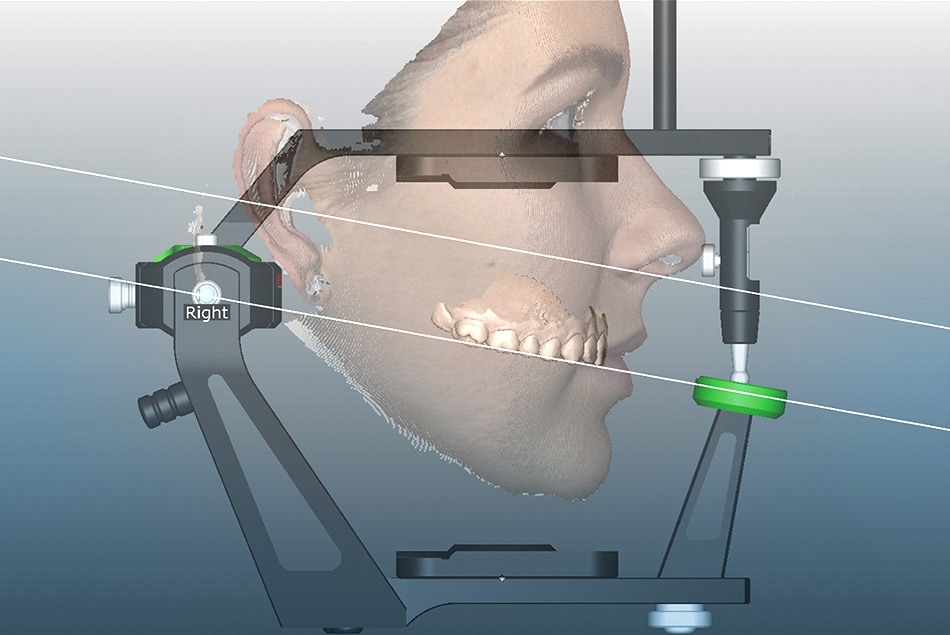 On a daily basis we are confronted to slanted planes, and, from a functional viewpoint, to insufficient dental restorations. Imprecise recording of the patient’s individual information when using the facial arc is one of the reasons. Therefore, Udo Plaster, with the help of the PlaneSystem, has developed a totally new data transmission approach.

With this system, occlusion planes and asymmetries are individually collected for each patient, using the natural head position (NHP) and the Tragus-ala of the nose, which are then transmitted in their true position to the CAO/FAO technology.

This enables you to detect eventual compensations before establishing a therapeutic chart, therefore considerably minimizing or even preventing sources of error, or error transmissions, during a restoration or prosthetic planning. Restoration modeling may now start. Ideally, the patient’s physiognomy should be taken into account at this time. This is possible with Face Hunter, the 3D Zirkonzahn Facial Scanner. The resulting facial digitized data, almost photo realistic, may be used as validation and reference for treatment planning and patient counseling.

TELL US OF YOUR NEEDS!

We are here to help and advise you.
Contact Us